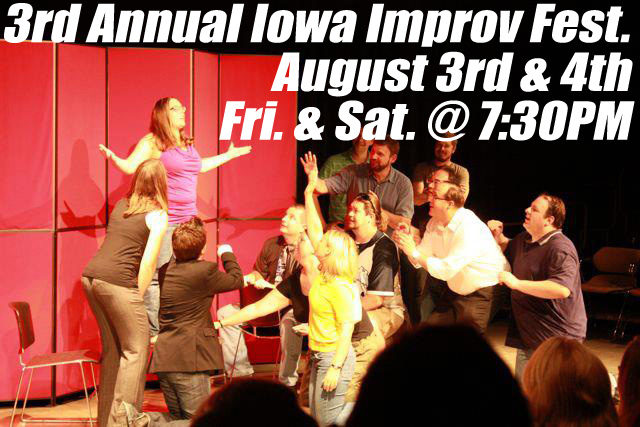 Held over two nights, the IIF features a 25-minute set from each troupe, along with a free-form jam at the end of each show.

Buy the 2-Day Package for $25 or visit the Non-Member ticket area for one day tickets.

Four improv comedy troupes are attempting to plan for the unexpected as they anticipate the Iowa Improv Festival. The third annual Iowa festival will be at the Civic Center’s Stoner Theater on Friday and Saturday nights. Des Moines’ Comedy Xperiment hosts the event, which also features Comics in Action from Cedar Rapids, Half-Masted from Cedar Falls and 88improv from Omaha. The shows run about 100 minutes and feature 25-minute sets from each troupe and a finale in which they combine their prowess to tackle audience suggestions.

The Iowa Improv Festival marks the start of the 10th year for Comedy XPeriment, a group of local amateur comedians who are always seeking out avenues that will allow them to approach improvisation from new ways.

We caught up with four members of the troupe as they prepared — as best as they can for an unscripted event — for the Iowa Improv Festival.

Q. How would you describe improv comedy to someone who’s never seen it?

Susie Irish: You’re going to see a show in which everything you see on stage is made up on the spot before your eyes. Nothing is scripted. Nothing is pre-planned. We get all of the suggestions from the audience. You get to be a part of the show while we create.

Irish: And no two are ever the same. Like snowflakes. Or fingerprints.

Gentzler: I only have 9 fingerprints.

Gentzler: I burned it.

Irish: One thing you’ll get at Comedy Xperiment that you won’t get at other improv shows is mutants.

Q. What skills make someone good at improv?

Noll Wilson: I say accepting and giving. Improv only works when you have a strong partnership. Their job is to take care of you and give you something you can use. Your job is to make them look good. You have to be willing to take a risk and fail.

Gentzler: It’s never about painting a picture by yourself.

Noll Wilson: I would say a lot of trust — that I go on stage every night trusting that they’re not going to make me look bad at their own benefit. Something we remind ourselves before every show is, “I’ve got your back.”

Q. Many comment about how hard it is to be successful at improv. What, in your mind, is harder than doing improv?

Kaniuk: I don’t know. To me doing scripted work is harder. There are more set parameters that you can be judged on in an acting performance.

Noll Wilson: It’s a different level of expectation. People who see improv, they know it’s going to wax and wane a bit. They give you a bit more leash to find your way.

Kaniuk: It’s hard from a scripted show to pull the same emotion night after night. With improv it’s all new, so it’s easy to pull out an emotion. That’s not to say I’m not good at scripted stuff.

Noll Wilson: That chair over there is reserved for Dave’s ego.

Q. Are there any topics that you’ve learned just aren’t funny to audiences? Or is everything on the table?

Kaniuk: For me, everything is on the table.

Noll Wilson: It’s easy to be dirty. It’s harder to be clever and to take a suggestion and take it in an unexpected direction. We challenge ourselves to have smart comedy.

Kaniuk: I would say that I’m always satisfied if we can pull in political or social commentary. I feel more satisfied to weave something like that through the show than just going blue.

Irish: We get suggestions that are not always our favorite. Like when people throw out vibrators or sex. The person who yells out that suggestion thinks it’s funny, but the rest of the audience gets uncomfortable.

Q. What’s the worst audience suggestion you’ve ever had to improv and how did the skit turn out?

Kaniuk: I don’t think we even remember what the worst suggestion was.

Noll Wilson: It’s our job to take it and turn it into something useable.

Kaniuk: That was a long time ago. There’s nothing they can throw at us that we can’t use. If the audience wants to see an hour and a half of raunchy jokes, it’s up to them. It’s their show to make suggestions for. I don’t ever want to say there’s a bad suggestion.

Noll Wilson: I would say a bad suggestion is no suggestion.

Q. Why should people attend the Iowa Improv Fest?

Irish: I thought of something today that struck me. In so many gatherings and festivals of this type there’s some sort of competition. There’s no competition with this. It’s about bringing people together to enjoy a mutual love of improv. There’s no sense of, “I want to be better than you.”

Gentzler: It’s a celebration of the craft.

Parting is Such Sweet Sorrow

Comics In Action Returns to The Bohemian