My daughter, Haley, had been looking for this particular video clip and I must say this snippet was initially introduced to MySpace several years ago… and never made it to YouTube as a formal video intro to our Improv Games… So, here we go with a more introspective clip into how we REALLY like to run our “Games.” 🙂

Recorded on April 1st, 2004… “Sock Puppet Theater” or by the the more mature Game Name… “Actor’s Nightmare” was performed at the former Hilltop Bar & Grill in Mount Vernon, Iowa. The “Lay” name for this show was titled “Winston Churchill Sock Puppet V”, but honestly… it was the culmination of being at the “Right Time” and the at the “Right Moment.”

Many have stated that this clip should reside as one of the Top 10 Comics In Action games of All Time! 🙂

Soon after this show, several of your CIA Agents (Abe “Agent Satyrboy” Peterka and Chris “Agent Skipper” Cardinale) would leave the troupe for other endeavors. Sill, this was a good time for Comics In Action. Honestly, you really should have been there to fully enjoy the moment… it was awesome! Yet, this DID become the start of Brian “Agent Butters” Bodensteiner… a CIA Agent with which there has been no other “on par” with his enthusiasm. It was a REALLY good year. 🙂 It really was… 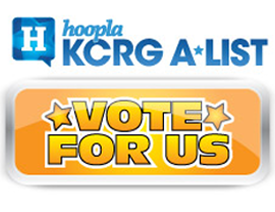 KCRG A-List: Second only to an actual comedy club